Like all trans-people I have been transgender all my life, but for many years and due to fear of abuse, ridicule and victimisation, I hid my gender identity behind a facade of stereotypical manliness.  But in recent times I have decided, for the sake of maintaining my positive mental health, to present my gender as I feel most comfortable.  I am a trans woman and present myself as a stereotypical woman as often as possible. But it is not easy in our transphobic society and frequently I alter my gender presentation to that of a stereotypical man just to maintain some of the essential needs in life, like a home, an income, friendships and relationships, a reasonable standard of living, and to walk the streets without fear of being stared or laughed at, and verbally and physically abused (all of which I have experienced to some degree over many decades).

Beneath my clothed exterior and thin veneer of femininity I still exhibit a fully intact, finely chiseled, fully functioning male body….no viagra needed!  For lifestyle, relationship and health reasons I do not want to undertake any medical processes to change my body, for example hormones or surgical interventions.  I am naturally an extremely feminine person and I present myself as femininely as possible all the time….my mental health is important to me and this is how I look after it.

I am male, male, male, no doubt about it……..as you can see in this picture where I am clearly clutching one of my balls…! 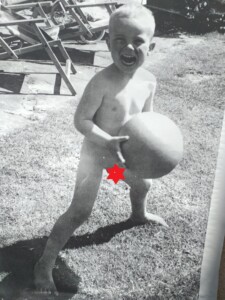 I am a professional engineer, qualified to MSc level, and I use my academic skills to analyse scientific books and papers relating to transgender and gender identity issues, and convert the information into layman’s language, easy to understand by someone who does not have a natural or informed interest in this subject.

My presentational skills have been honed during a 25-year army career, including the Royal Military Academy, Sandhurst and Army Staff College, World renowned for producing the best military commanders.  I now use my skills to “command” an audience, and I deliver a well-polished flagship presentation called the “Bluffers Guide to Transgender”, a “light-hearted gallivant through the wonderful world of transgender in a memorable learning experience”. 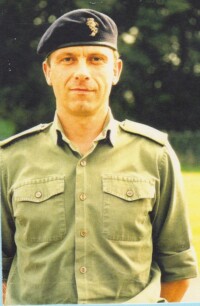 Why am I passionate about educating people on gender identity issues?

I first started wearing dresses when I was a teenage boy (these photos were taken around 2002), and I did so because it was so natural for a sensitive and sensual soul, like myself, to wear lovely soft and delicate clothes; but in those days I dare not leave the house or even tell my friends and family about this desire, for fear of being disciplined, ridiculed and abused.

If I had done I would probably have been sent for psychiatric treatment, and if I had persisted it would have affected my ability to form relationships, to have friends, to socially interact with other people, and it would have severely impaired my employment prospects. I definitely would not have been able to join the Army, and when I did join, if the Army had found out about my gender-fluid nature I would have been discharged under mental health regulations, as did many people who came out as transgender during their military careers in the final decades of last century (but please be assured, the British Army is now officially one of the best LGBT employers in the country).

For several decades, and in places where no one would recognise me, I exercised my right to wear clothes that most reflected the person that I am, and I would go out and about in my favourite skirts. I endured constant abuse and ridicule, from “white van man” occupants yelling “Oi mate, what’s up your skirt”, to women who would walk up to me and ask me directly “why are you wearing a skirt mate?” Some would take it upon themselves to lift up my skirt to take a peek underneath. All these encounters would nowadays be regarded as transphobic and unacceptable, and it is a reflection of how much Society has changed for the better in recent years.

I learnt not to walk through the streets of a town around 3pm to 4pm in the afternoon because I was fed up of groups of school children staring, giggling and shouting at me; I learnt not to walk passed pubs on a summer’s evening because there would always be a group of lads willing to hurl abuse my way.

I once went into a pub in Southampton wearing a skirt as a feminine man and sadly was confronted by about 12 drunken football supporters; their team had lost, and they decided to focus all their anger on me, yelling obscenities and making suggestive comments about my manhood; I was in fear of my wellbeing.

Nowadays, all these acts of personal invasion and ridicule are regarded as transphobic hate incidents or are illegal because under the Equality Act 2010 I belong to the protected characteristic of “gender re-assignment”.

And this is why I am passionate about educating people about gender issues. I have had over a quarter of a century of abuse directed towards me and I want to do everything I can to teach people that being transgender and gender non-conforming is an acceptable “state of being” within society.  If people are allowed to express their true authentic selves without fear, they are more likely to be happier people, both at home with friends and family, at work, and in society at large. A happier employee is more likely to be a more productive employee.  A person who looks after their mental health properly will be less of a burden and cost to our health system.