Or how culture and language defines how we think of Gender.

How Transgender am I?

I have always wanted to understand how transgender I am.  The science of transgender is immature and there is no precise explanation, genetics and epigenetics (The Two Factor Theory*) being the current focus of scientists, but to date there is no absolute measure of how transgender a person may be.

But I need to know because my marriage is at stake; I want to stay married to my wife but she did not marry a woman – I only told her about my transgender status several years into the marriage – but she sees in the media the term “transgender” being applied to only those people who have fully transitioned from one binary gender to the other gender.  But I am non-binary gender-fluid, which means I only present as a woman on a part-time basis and only socially, I do not have a need to make any physical or legal changes.

And in the absence of empirical absolute measures, I make the judgement by comparing myself to other trans-people. In other words I measure my degree of transgender by relative comparisons, and hence have developed the Theory of Transgender Relativity, which applies empirical measures to the two variables that govern how transgender a person is, the degree (or power) of their gender dysphoria, and the degree of transition they are prepared to undergo to feel comfortable in their preferred gender identity.

*See Professor Thomas Bevan’s book The Psychobiology of Transsexualism and Transgenderism, A New View Based on Scientific Evidence

**Please note that the only thing I have in common with Einstein is that when we were both young men we had exactly the same hairstyles.

All transgender people begin their trans journey from the moment they feel the affect of gender dysphoria, that anxiety and uncomfortable feeling associated with gender incongruence.  They then have to choose if they want to embark on a series of options for transitioning to their preferred gender.

They can choose just social changes, for example clothes, make-up, hair-styles or they can go the next step and make physical changes, including taking hormones or having surgical interventions like breast enlargement or reduction surgery and genital plastic surgery, and they can make legal changes like changing their name by deed poll or birth certificates by obtaining a gender recognition certificate. And as appropriate they can choose whether to make any or all of these changes fully or partially. 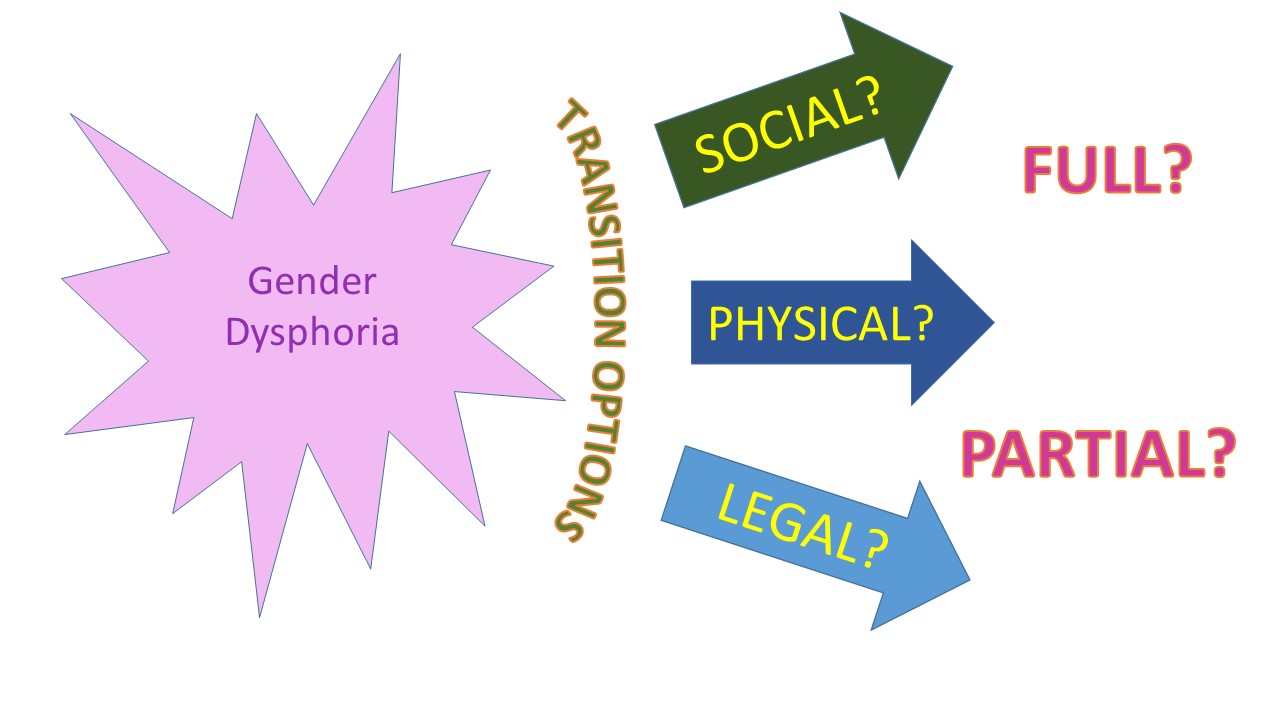 These decisions are dependent on several factors, including age, strength of gender dysphoria, desire and determination to transition, and lifestyle factors.  They will have to consider the impact on family, other relationships, employment, and their own personal mental and physical health.

But it is the degree of gender dysphoria that will drive the person to make these life-changing decisions, and my observation of my trans-friends is that this feeling is more powerful in some than others.  So I have developed this table to provide an empirical measure of how the degree of gender dysphoria relates to the desire to make changes (rather like the Beaufort Scale relates wind speed to observed conditions at sea or on land). 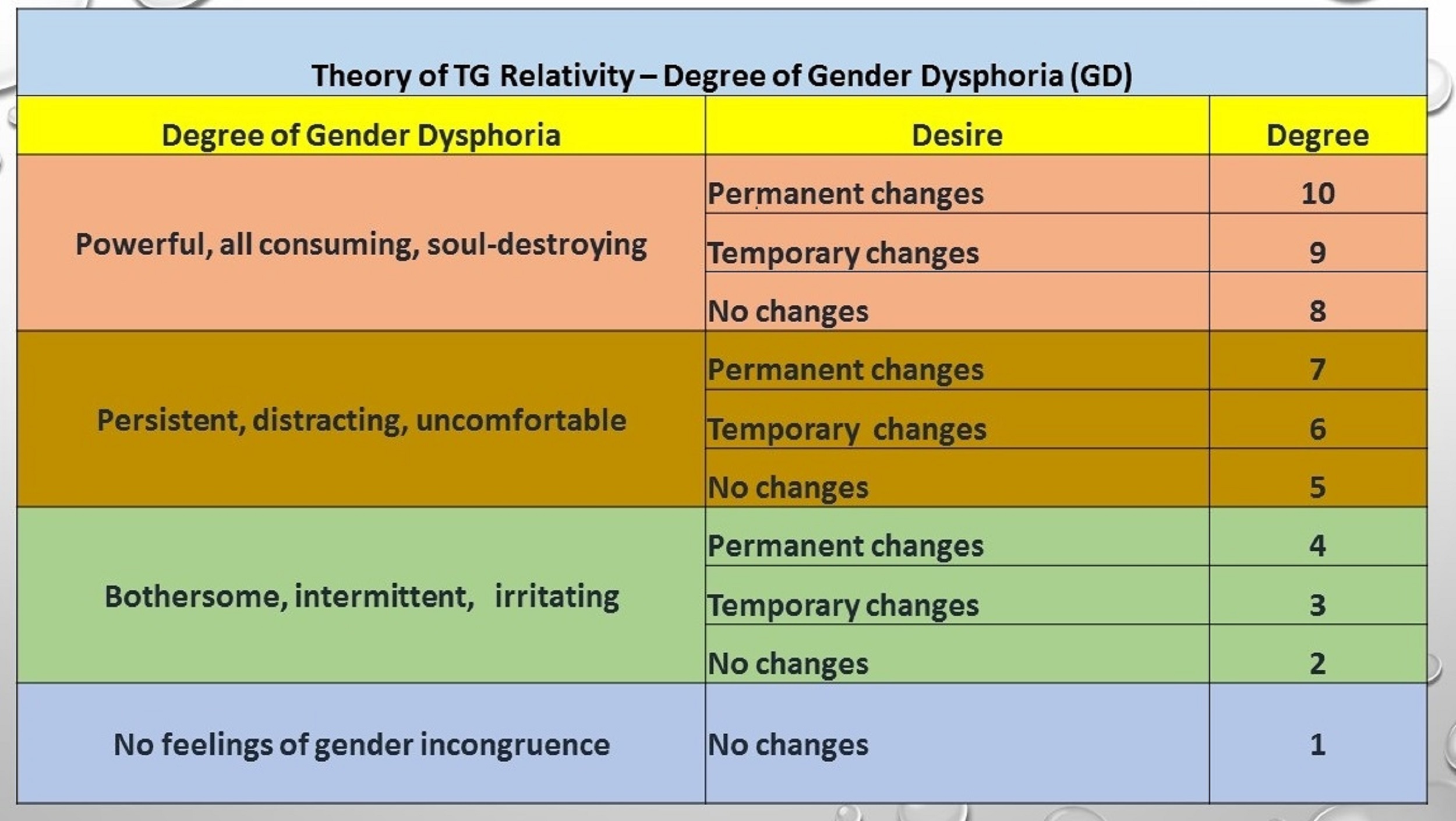 Each trans-person is unique; they know how powerful their gender dysphoria is, and resulting impact on their mental health, but two people with equally debilitating gender dysphoria will have many other factors that determine their degree of transition (my main factor is the impact on my marriage and friendships).  This table gives an empirical  measure of the degree of transition that a person can undertake. 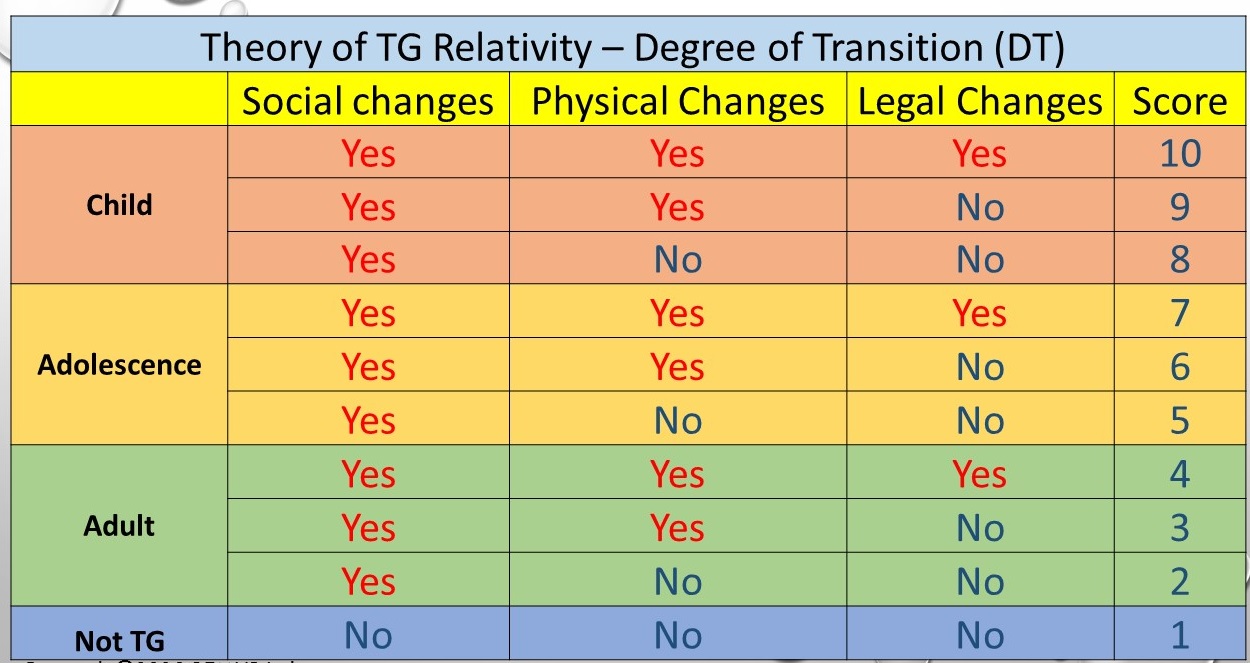 I have taken these two empirical measures and multiplied them together to give a final relative percentage of degree of transgender. 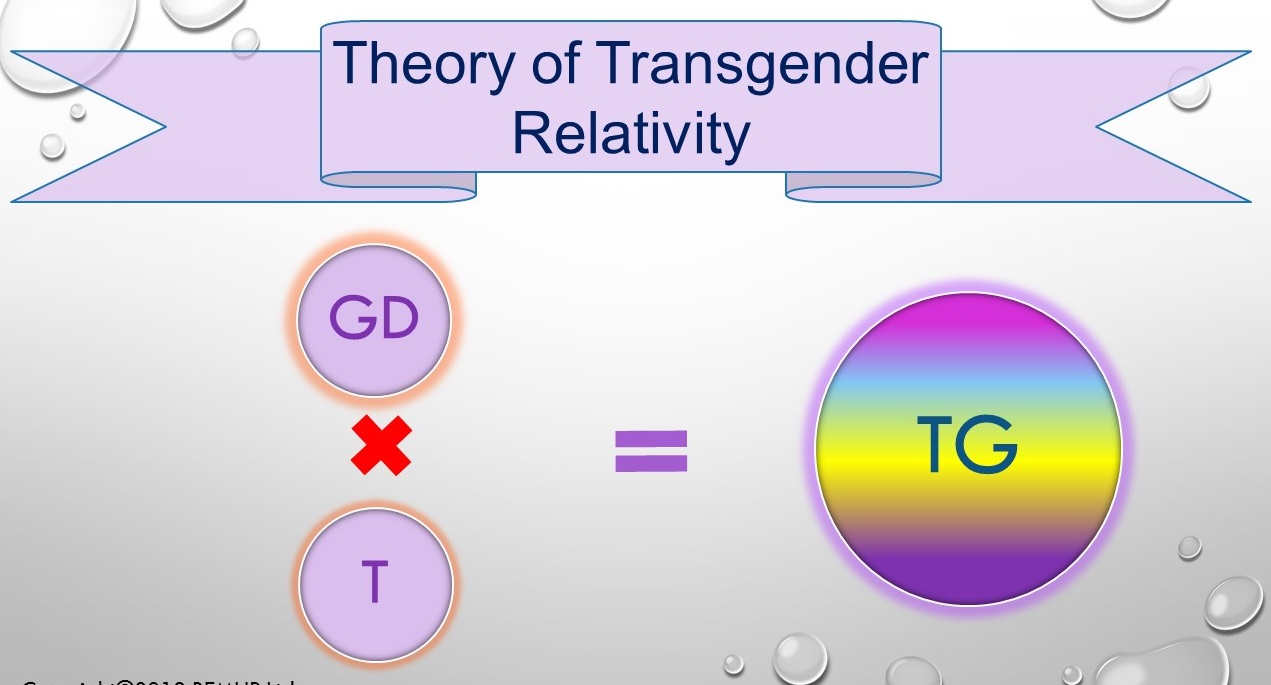 So, using my situation as an example, I have only been aware of my transgender status since I was 13 when I started wearing my mother’s and sister’s dresses; I was not aware of my gender dysphoria at the earliest age (4 or 5 years old is typical) and for me it was not powerful and all-consuming but rather it was (and still is in my middle age) just irritating and annoying.

And whilst I feel at my most comfortable and healthy when presenting fully as a transwoman, I cannot live like this 100% of time due to relationship and lifestyle factors.

So I give myself a score of 5 for degree of gender dysphoria and 6 for degree of transition, a transgender score or percentage of 30%.This is so important to me because it shows my wife and friends that I do not want to transition to live my live fully as a woman, and my marriage and friendships stay intact as a result. 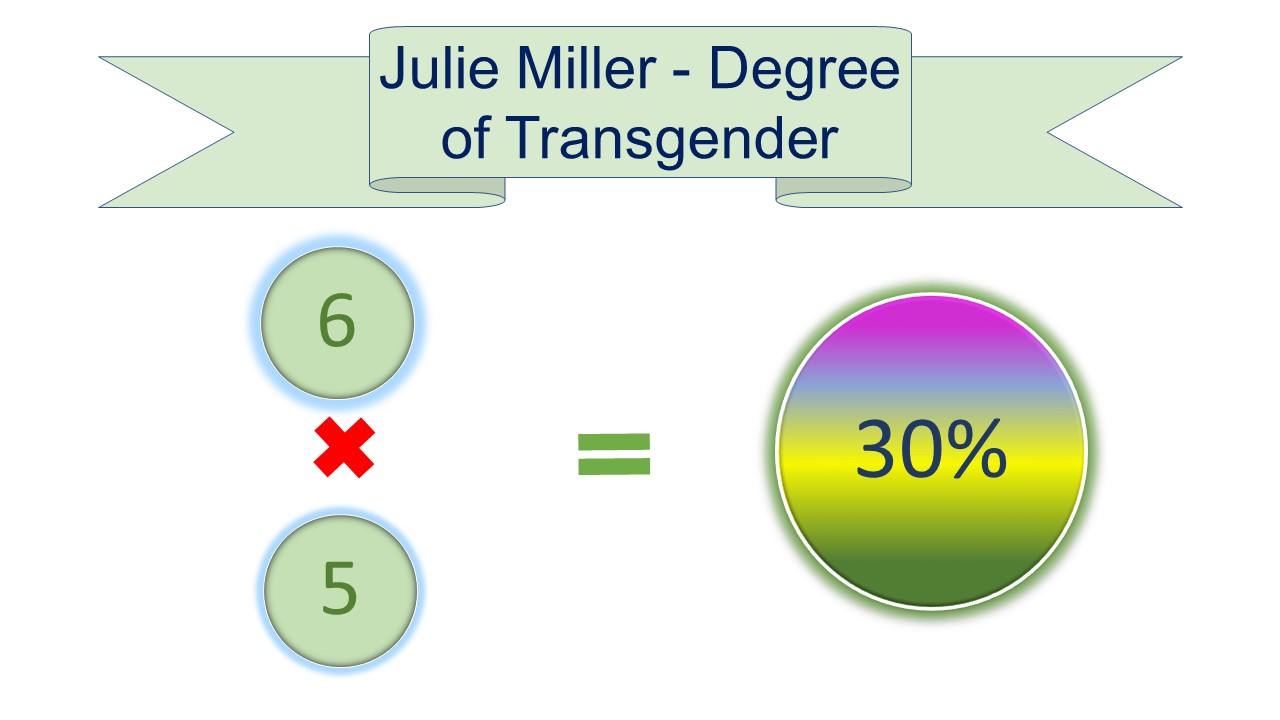 How Transgender are you and why does it matter?

If you have complications in your life resulting from your transgender status, you may find it useful to apply the Theory of Transgender Relativity to your own situation.

Many trans-people live in the closet, afraid to let their friends, family and colleagues know that they are a trans-person.  Many of these are  males in relationships with females and the man is frightened that if he reveals that he prefers to present his feminine side on occasion, his female partner will think that he wants to live 100% as a woman, including have the respective surgical and hormonal treatments.

However many MTF trans-people present their feminine side only on a partial rather than full-time basis, presenting their female persona perhaps once or twice a week for example.  This is enough to satisfy their desires and manage their gender dysphoria (anxiety).

To avoid this assumption and fears of the wife that her husband wants to live as a woman for the rest of his life, by calculating your percentage transgender using this theory will show empirically to your wife that you are only mildly transgender and ameliorate her fears. 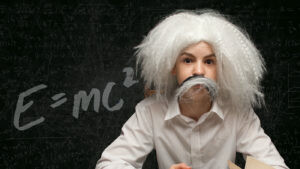